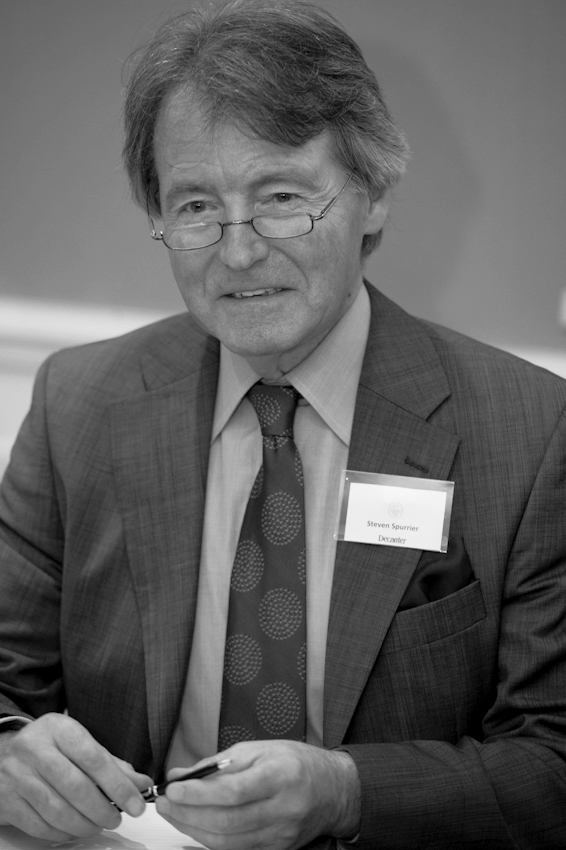 STEVEN SPURRIER, born 5th October 1941, was educated at Rugby School and the London School of Economics.   In 1964 he joined the wine trade as a trainee with Christopher and Co (established 1665). In 1970 he moved to Paris and purchased Les Caves de la Madeleine, a small shop in the centre of the city, and in 1973 opened L’Academie du Vin, the first independent wine school in France. As a partner, he became involved in divers ventures allied to wine: Le Bistrot a Vin, a winebar/restaurant in the business quarter of La Defense; Le Chemin des Vignes, a warehouse and bottling plant on the outskirts of Paris; Le Moulin du Village and Le Blue Fox, a restaurant and winebar near the Caves de la Madeleine.

Spurrier is perhaps best known for having created the tasting between top Chardonnay and Cabernet Sauvignon wines from California and France in May 1976, subsequently referred to as The Judgement of Paris. A recreation of this event was held 30 years to the day on May 24th 2006, simultaneously in London and Napa.

In 1988, he sold his wine business interests in Paris and returned to the UK to become an independent wine consultant. His clients have included Harrods in London and Hediard in Paris, Singapore Airlines and Christie’s for whom he created the Christie’s Wine Course in 1982. He is also Consultant Editor for Decanter Magazine and Chairman of the Decanter World Wine Awards, now the world’s biggest wine competition, since its inception in 2004 and Chairman of Decanter Asia Wine Awards, Asia’s largest wine competition, since 2012.

Some of the prizes and awards that Steven Spurrier has won include “The Bunch Award” for articles in Decanter in 1996, “Le Prix de Champagne Lanson” in 1997, “Ritz Carlton Millienia Lifetime Achievement Award” in 1999 and “Le Prix Louis Marinier” for writing on Bordeaux in 2000. In 2001 he was awarded “Le Grand Prix de l’Academie Internationale du Vin” (only the third time this award has been given since 1982) and also “The Andre Tchelistcheff Maestro Award” from California.

He is married, with two grown-up children, and lives, when not travelling, in London and Dorset. After much reflection and research, he decided with his wife Bella to plant a vineyard on their farm in south Dorset. There are now 25 acres planted to 55% Chardonnay, 25% Pinot Noir and 20% Pinot Meunier to make English Sparkling Wine under the name Bride Valley Vineyards, the first vintage being harvested in October 2011, the month of his 70th birthday.