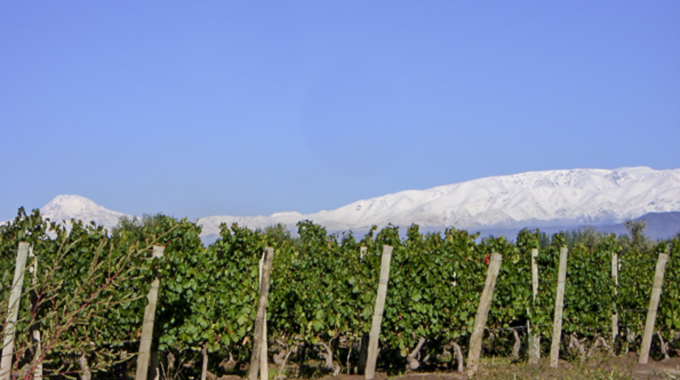 Heavy rainfall and late frosts made the 2015 harvest quite complicated

– so much so that last year’s seems simple in comparison. No doubt most of Mendoza’s viticulturists and enologists share my feeling. But, although this year’s wines are still in maceration with their skins, I am quite sure that we have very good wines.

Complicated weather brings about greater disparity in wine quality: this year there is a big difference between the vineyards that have been well cared for and those that have not.

A somewhat warm spring with early sprouting
The winter was benign and dry. In September and October the ground temperature rose rapidly, leading the vines to sprout very evenly and about a week early.

At flowering time, in the second week of November, we had the season’s first frost scare. The Uco Valley and the lower areas east of Mendoza were especially aVected. Some vineyards were minimally damaged, but the dry, somewhat warmer-than-usual weather, ensured a good setting and expected production was not affected in the end.

A different summer
December was warm and with scarce precipitations, between 10 and 20 mm. In late December, producers had another scare – though it was probably undetected by the average Mendoza. A cold front lowered temperatures to nearly 3°C in the lowest parts of the Uco Valley. I have never before seen frost so late in the year in Mendoza. Fortunately there was no damage, and January’s climate was warm and dry. In our vineyards we had only 15 mm of rain in Perdriel, 12 mm in Drummond and 0 in Altamira.

El Niño started showing its eVects in February. Temperatures were even higher than last year. We had 149 mm of rain in our Perdriel vineyard, 97 mm in Drummond and only 55 mm in Altamira. Even more significant was the relative humidity, which was permanently high. The month’s maximum was 85% and the mean was 62%. Each morning had a heavy dew, the vineyards’ leaves and  bunches were wet.

The first symptoms of Botrytis and also Mildew began to appear in some vineyards. Of course, this was not the case in those that had been well taken care of – that is to say, with well balanced canopy and vigor, well-distributed sprouts and bunches, with good aeration and limited productions. In cases where this care was well realized the grapes remained healthy until the usual harvest time.

An early harvest for most producers
March’s climate had somewhat less rain but more humidity than usual. Perdriel, Drummond and Altamira had 61, 41 and 37 mm of rain respectively, and the median relative humidity remained over  60%.

Though Cabernet Sauvignon’s thicker skin tends to be more resistant to Botrytis, in the area it was more aVected than the Malbecs by what we call internal Botrytis, where the fungus enters the berry at the moment of flowering and, conditions permitting, attacks the skin at maturity. This is avoided with vineyard care at an early stage, with shoot and leaf removal and green harvest, all tasks that improve the balance and distribution of the grape bunches.

Most producers, even the big wineries, decided to harvest their grapes early in order to protect themselves from the rot. The results were generally good and the wines obtained from these early harvests amply exceeded expectations, especially the Malbecs.

The rains continued in April, though it was somewhat cooler. Unlike previous months, the rains were heavier in the Uco Valley than in the northern zone. Perdriel, Drummond and Altamira received 27, 15, and 75 mm, respectively. In Altamira we registered 50 mm in our vineyard over just a few hours. An unusual phenomenon in the area, and more so for the season.

The well cared for vineyards were able to wait to harvest. In April they obtained very good results, not only in the Malbecs, but also other varieties, such as the Cabernets and the Petit Verdots.

The harvests in Patagonia and the Calchaquíes Valleys were also of good quality. Especially in the north, where the climate was dry, as it is habitually.

The 2015 harvest will worth remembering – especially for the winemakers who had to work hard to get quality grapes and wines. We observe excellent, very aromatic Sauvignon Blancs, Chardonnay and Semillon. Malbecs have once again been the clear winners, demonstrating their excellent adaptation to our terroir. Most importantly, the results diVered vastly between areas and vineyards. While some only produced correct wines, others achieved very good ones.

In our case, I estimate it might be a new 2007. Not very loved at the beginning, but excellent with the passage of time. That is to say, fresh wines with good acidity and fruit that evolve well. Let’s see!